Skip to content
A Long Soakaway in Long Eaton

A Long Soakaway in Long Eaton

Early this year in June our contracts manager Alan Law was requested to attend a site in Long Eaton where a Sewage treatment system had gone a bit Awry. There were a number of issues identified with the treatment vessel and overall it required a two stage repair.

The first element was a job for our installation team; recent works had been carried out at the discharge point of the sewage treatment plant whereby the neighbouring property owner had done some excavation works in the boundary ditch, this meant that this was no longer a viable option for the treated effluent to outfall to. This meant that a drainage field was required to be installed as a new point of discharge.

After percolation tests were carried out it was determined that over 145 linear metres were needed to be installed, there was plenty of land for this to be installed on however the main issue we had was that access was very poor as prior to the property boundary there was a narrow bridge that had a restricted weight limit. This meant that we needed to offload all machinery and materials over the other side of the bridge and track them across one by one. 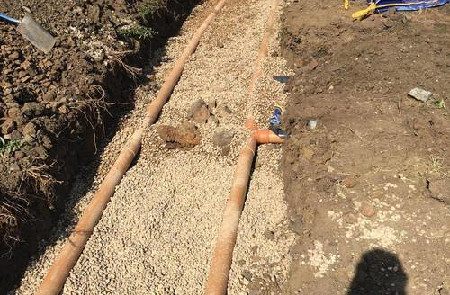 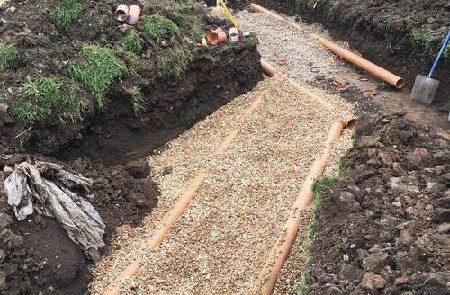 As the sewage treatment system was installed at an elevated level, this meant that the drainage was to be installed at a minimal depth, the lack of depth we were installing this in meant the overall surface area for the soakaway was larger than usual. In total we had a delivery of 40 ton of granular material to go to this site, this was in individual ton bags and each bag needed to be moved one at a time to the working area with a dumper.

After these works had been complete, the second stage was then actioned; this was a job for our servicing engineers to carry out a complete overhaul of the sewage treatment system and pump station on site. Another point that was required to be carried out prior to these was required to be done by the customer this was the removal of some Japanese knotweed which had just started to develop on the land, this was to avoid any damage being done as a result of its presence. 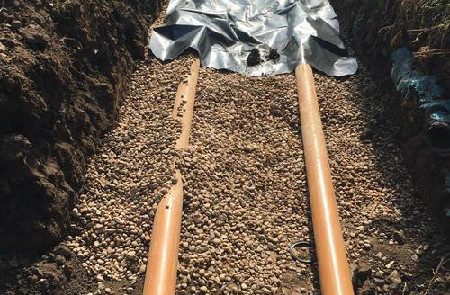 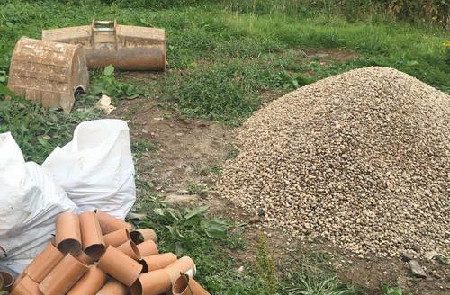 R A Dalton for all your installation, servicing and remedial requirements.

The Pump station required a number of different parts including two new Grundfos pumps, a variety of different pipe fittings, valves etc, four floats, a new control panel and a new beacon to act as an early warning system for the pumps not working or running at high level.

The Sewage treatment system required a similar amount of work with a vast amount of new parts and fittings being required to make the system operational once again. To remedy all of the issues on site it took two engineers a full day to fit all of the new elements to the system. The end result however was that both the pump station and Sewage treatment system were left fully operational.

With both the new soakaway in place and the Pump station and sewage treatment plant having a full refurbishment, as long as professional and regular maintenance is carried out this site will be avoiding any further costly remedial works and will have extended the lifespan on their vessels by a considerable amount of time.