Skip to content
Up North with the Kingspan Klargester BioTec 2

Up North with the Kingspan Klargester BioTec 2

In the summer months of 2016 one of our contracts managers attended a site in Hartburn, County Durham which was needing an installation of a new package sewage treatment plant to replace the outdated and non-compliant existing Septic Tank.

A full comprehensive site inspection was carried to determine which tank was going to be best suited for the application, for the single dwelling we recommended that a Kingspan Klargester BioTec 1 package sewage treatment plant was installed. The BioTec is one of the two domestic aeration vessels that Kingspan Klargester offer.

The BioTec and Bioficient treatment plants both offer an advanced method of treating effluent and are easily some of the best aeration systems on the market. The main difference between the two systems is that the BioTec is designed for a deeper excavation and installation whereas the Bioficient is best suited for a shallow install.

Due to the inlet invert level on site being 1.5m this narrowed down our option to the BioTec. We proposed to install the new treatment plant in the verge alongside the retaining wall at the edge of the yard area, the treated effluent would then run into the surface water drain before discharging to the watercourse across the road. 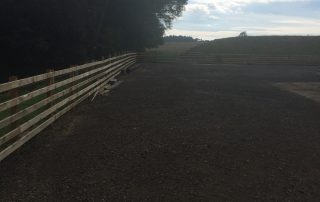 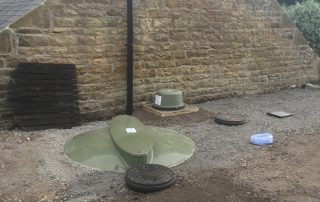 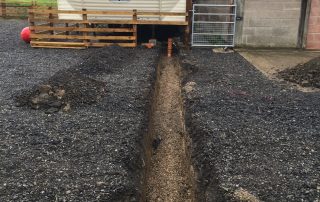 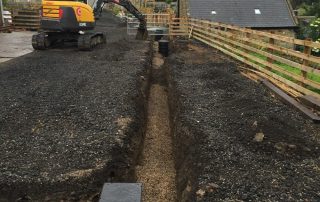 We are one of the country’s leading Kingspan Klargester Accredited installers.

In the first instance we received the go ahead for the installation to take place but as the date for the works commencing was approaching we were asked if it would be possible to re-attend site to re-quote for a sewage treatment plant to serve their neighbours property as well.

After our revisit to site we determined that the best system to suit site would still be a BioTec however they would need the next size up (the Biotec 2). Installing this system to serve the two properties meant that some amendments were required to be made.

The change in location also meant that the depth of the invert was a lot shallower and could be reduced to 1 metre. The location change also meant that some modifications to the existing drainage would need to be made.

Moving the proposed location of the tank also meant that there was a considerable amount more drainage to install as it was no longer just being fed by the one property. In total between the two houses we installed 54 metres of inlet drainage with 5 inspection chambers located along various parts of the drainage runs. The outlet was a considerable amount shorter with only 9 metres being installed inclusive of a sample chamber. 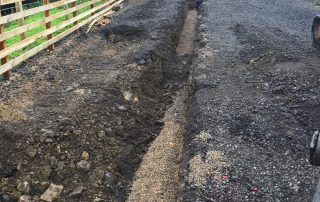 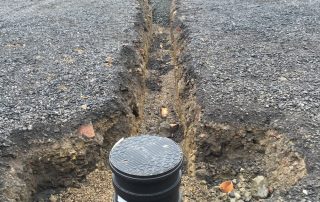 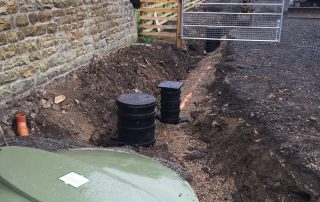 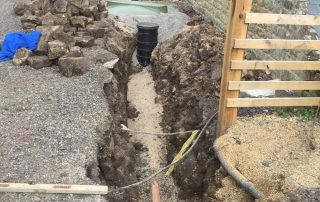 A professional and reliable drainage service.

Both inspection chambers and sample chambers are important to consider when installing your Sewage treatment system. The inspection chambers make it easier to identify if there is a blockage on the lines and if there is a blockage found these make it easier to rod/ jet the drains. If you are discharging to a watercourse it is a good idea to make sure you have a sample chamber installed as this can also identify potential issues with the system along with allowing samples to be taken by the Environment agency/ service provider if they are deemed necessary.

If you ever have a quotation from ourselves but the situation on site has changed please do not hesitate to give us a call as we can arrange for our contracts manager to re-attend to assess the situation again.