Skip to content
A day in the life of a R A Dalton servicing engineer.

A day in the life of an R A Dalton servicing engineer.

On the brisk sunny morning of August 3rd 2020 an opportunity arose for a member of our office team to get a comprehensive insight into the way our service engineers set about their day.

With the aim to gain valuable knowledge in order to aid the development of a more complete onsite electronic system for reports and site history storage, Sam from the R A Dalton Head office in County Durham joined servicing engineer Carl for a local day of servicing.

Starting at 6:00 AM in our yard, the first port of call was to clean the van and do a full restock of the most commonly used spare parts for the variety of systems we service.

Every week the engineers have a meeting in the yard (alternating from servicing to installation) where they are brought up to date with any new or different procedures and any queries can be raised and answered.

At around 6:30 AM Carl and Sam were ready to embark on their day of servicing!

Arriving early in the morning Carl and Sam were greeted with their first obstacle course of the day!

On approach to the first sewage treatment plant their athletic abilities were put to the test with hurdling fences, ducking under electric fencing and dodging the overgrown nettles.

The system installed on this site was a WPL Diamond sewage treatment plant serving a farm cottage in Northumberland, the first port of call was to lift the lids on site and do an initial visual inspection. Carl then checked the level of the sludge and it was determined that the system was due a routine empty.

Next, the blower box was removed and the blower was stripped down, all mechanical elements checked and a new filter was installed. The air pressure and electrics were also checked for any potential issues and was all marked as working at a satisfactory condition. To complete this section the cobwebs from under the housing was brushed away and the blower housing was secured back in place.

During this service the following items were checked:

Once every element had been checked the lids were then re-secured and site was left as undisturbed as it was found, then back through the nettles, over the fence and under the electric tape they went to go find the customer on site.

The findings and recommendations were then discussed with the estate manager and they were made aware of all of the proceedings. 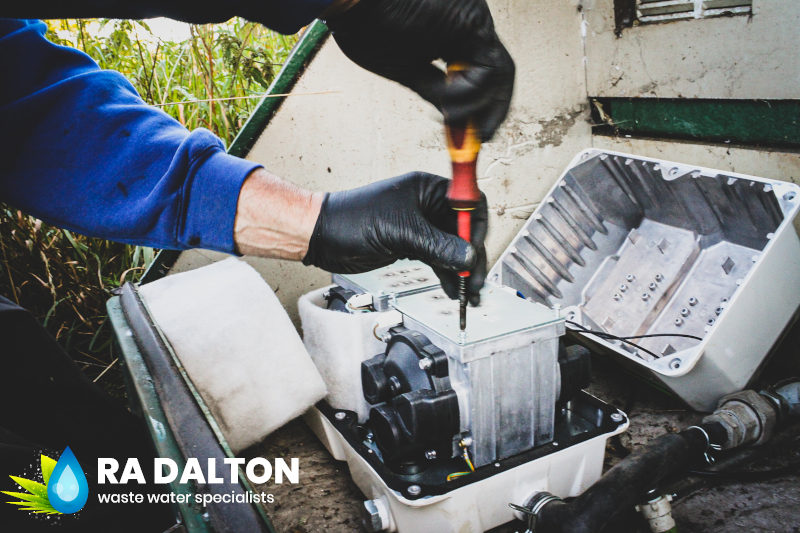 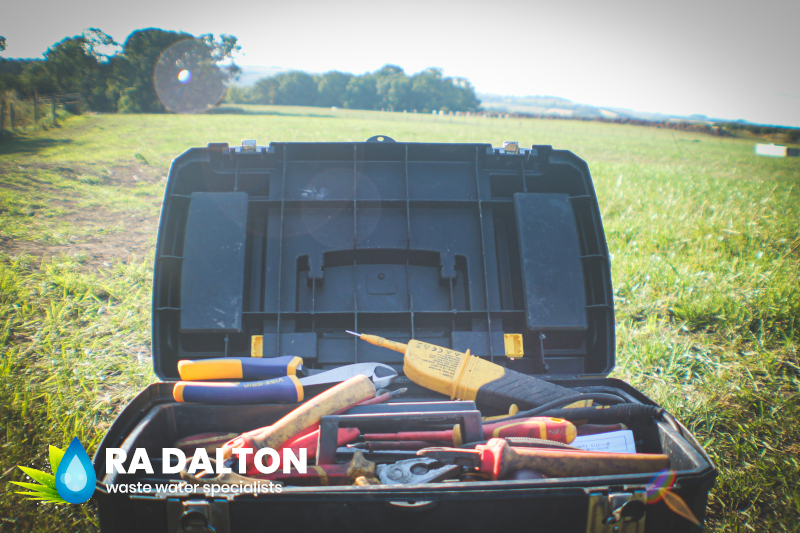 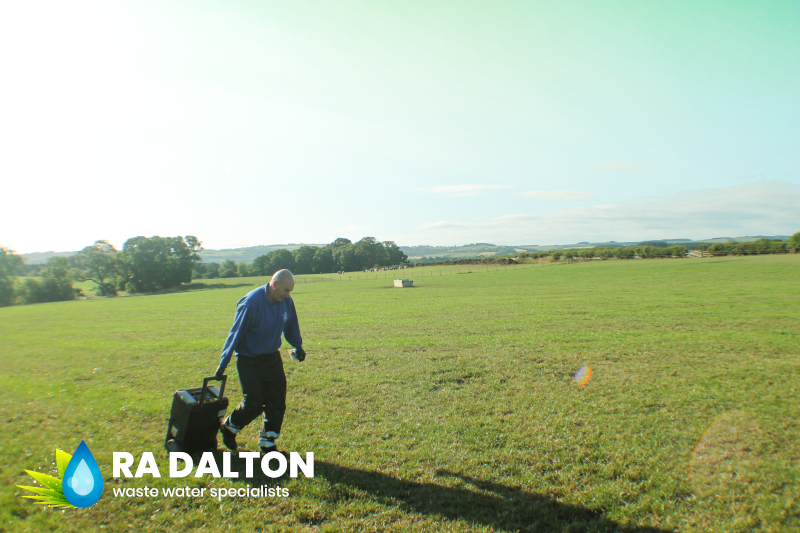 On to Hexham for a BA BioDisc and Matrix sewage treatment plant.

Approximately 45 minutes after the first service had begun our little servicing team then proceeded to head to the next destination, this site incorporated two sewage treatment plants to serve a few holiday lets on site.

This time around the obstacle course was toned down a little with only a little fence to hop!

The first system to be checked was the Klargester BA BioDisc, once the lid was lifted Carl proceeded to hose down the media/discs. The levels of sludge was then tested and it was determined that the system needed an empty within the next month or so.

One of the vital tests to carry out on the BioDisc service is to torque check the bolts as these are vital for the suspension of the shaft within the system. Once these were tested the majority of the U bolts needed replacing, this allowed for these to be checked and replaced before major issues occurred.

A BioDisc system generally has more items that need checking during a service, this included:

Whilst checking the operation of this system the one thing that really stood out to Sam was the smell, or lack thereof… Regardless of the fact the system needed emptying the smell was not even noticeable to Sam and it came to quite a surprise.

Once the BioDisc had been fully checked over and all items noted, the lids were then secured and they moved on to the next system which was the Matrix treatment plant.

Due to the depth of the chamber Carl used a gas detector to check carbon monoxide levels and all was checked okay, the sludge depth was then checked and this system was also due an empty so could be tied in with the BioDisc empty.

As this system was an aeration system the checks were very similar to the first site and as per standard protocol the Blower was stripped down and the filter replaced. It is recommended by all manufacturers that the filters are changed regularly and routinely to avoid the blowers pulling in foul air.

The items checked were:

Whilst on site our engineers also note details of access restrictions, distance from hard standing and if the system is in an usual place of hidden this will also be recorded for the next engineer to attend.

The findings on the service for both the systems, inclusive of changing the U bolts and requirement for desludging was advised to the estate manager and they were informed that the office would be in touch once the paperwork was received to see if they would like to go ahead with an empty. 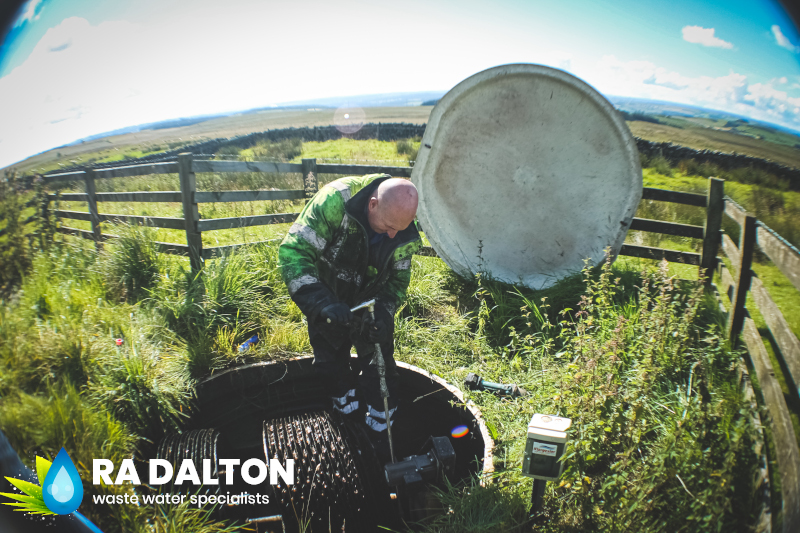 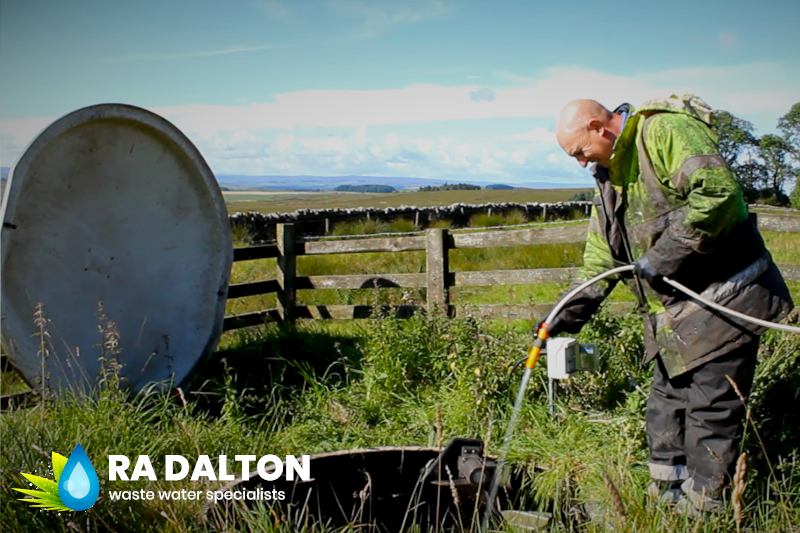 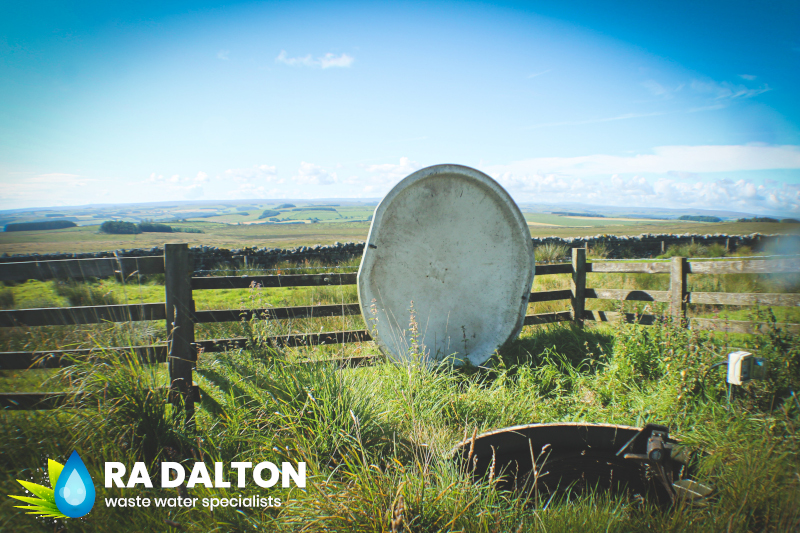 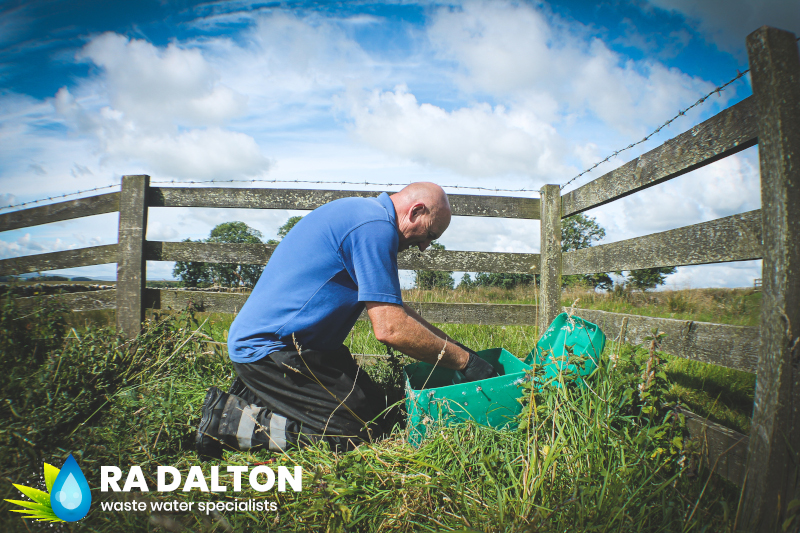 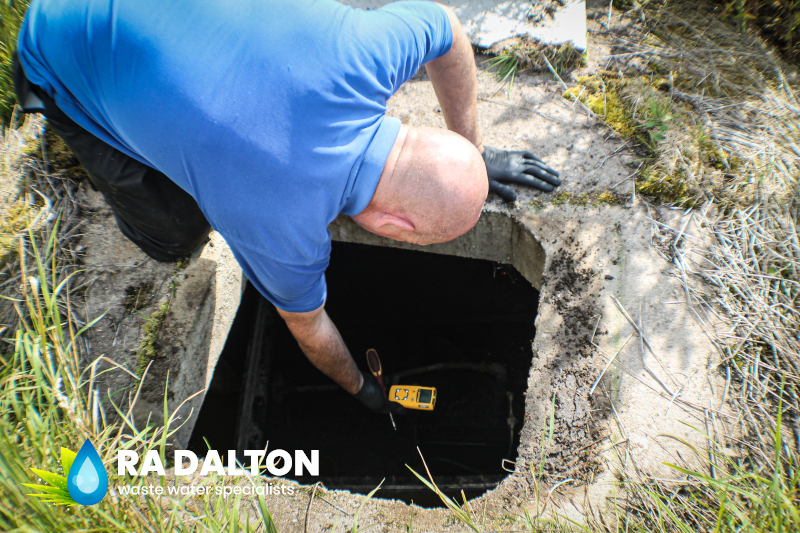 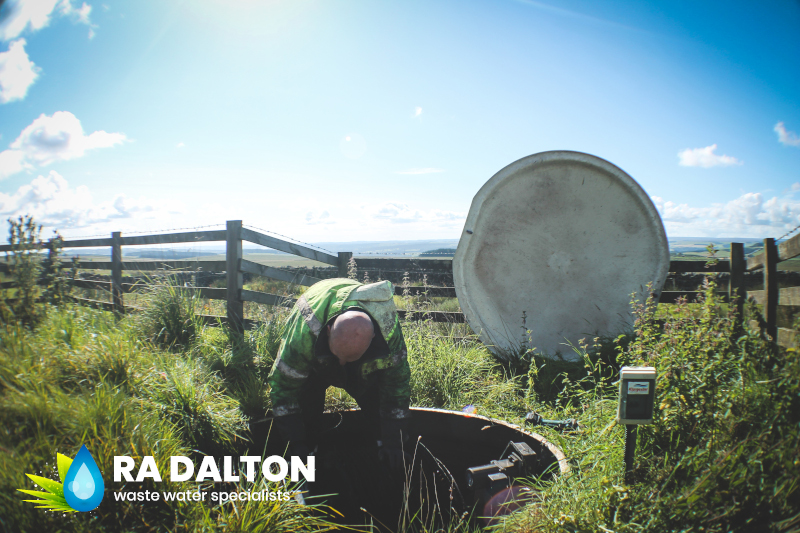 A historic site in Haltwhistle with the WPL.

Just to keep in with the theme of the day, this system, rather than be an obstacle course, liked to play hide and seek – thankfully our records put a sharp end to this game and the WPL sewage treatment system was revealed under the decking.

Upon lifting the decking it became instantly apparent something wasn’t right, the system was not operating and no aeration was taking place. The first check carried out was on the electrics to make sure the supply was present.

Once this was deemed to be okay, the next phase was then to carry out some tests on the blower. As this is the only mechanical element to the installation it was far easier to identify the issue and as the blower had been installed in excess of 11 years it was deemed to be at the end of its life expectancy and any repairs carried out were likely to be temporary at best.

Options were then discussed with the property owner and they agreed that the new pump was the best choice for longevity of the system and to get the plant back up and running as soon as possible. The old blower was then replaced with a new JDK-S-100 air pump. 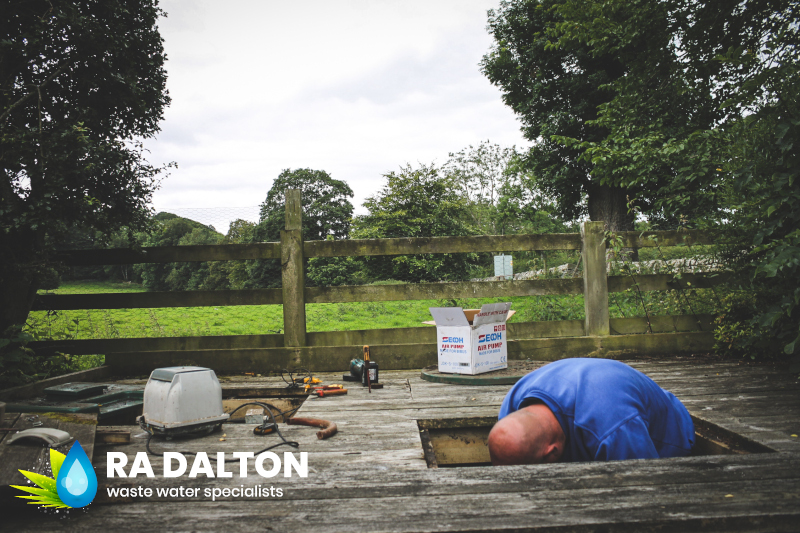 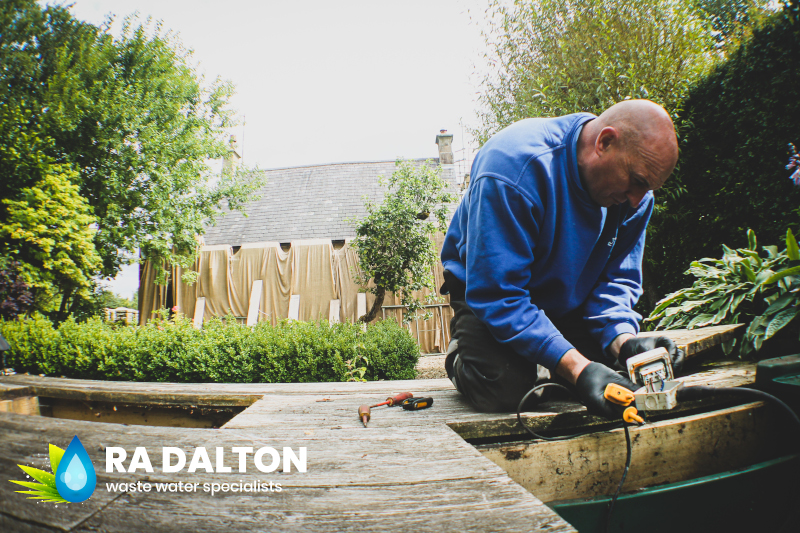 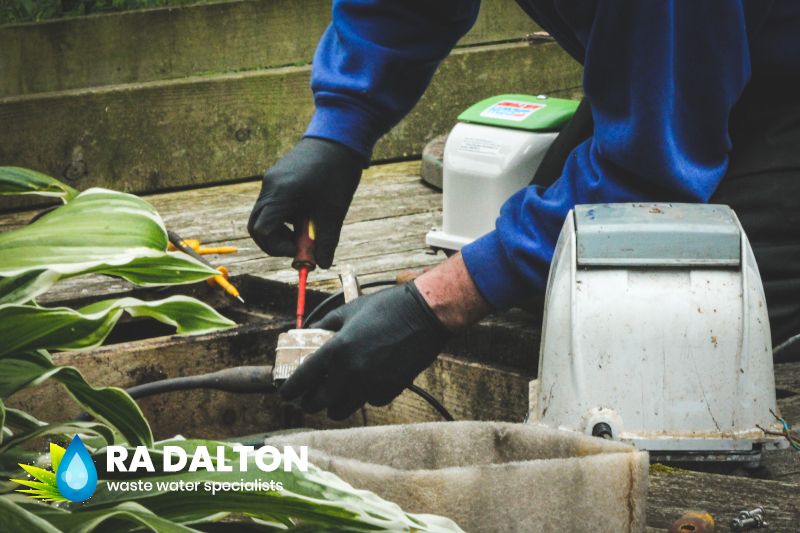 Back to Weardale for the final home stretch for a Klargester Bioficient 1.

The next site brought the team back over the hills and into a property where we installed a Klargester Bioficient 1 package sewage treatment plant back in 2016. Following on from our install the customer went ahead with servicing and had been routinely serviced annually since 2017.

This system incorporate all the bells and whistles and much alike the WPL and Matrix system the Bioficient 1’s blower was completely stripped down, filter changed and all mechanical elements checked.

On this system we checked:

Although the system did not require an empty it was noted that there was a lot of detergent present in the system which was creating a white foamy liquid around the media. This needed to be monitored as excessive use of detergents and bleaches can actually kill of the good bacteria within the system and will eventually mean it will not be operating as designed. 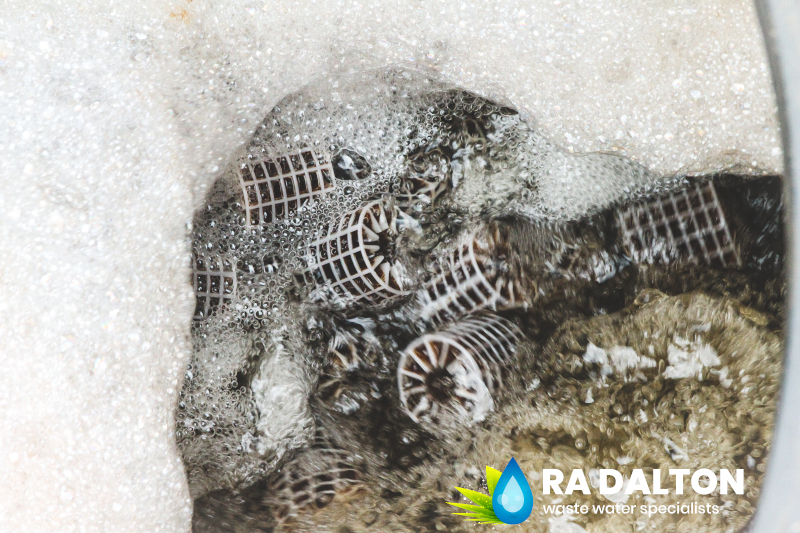 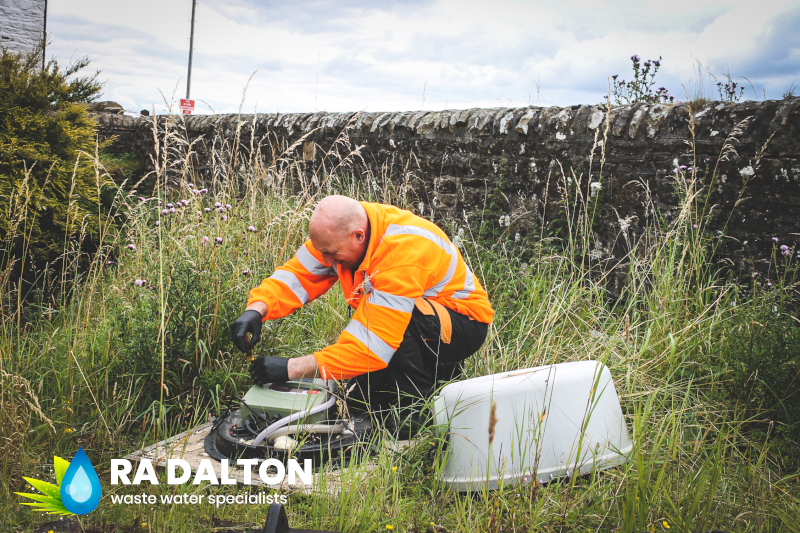 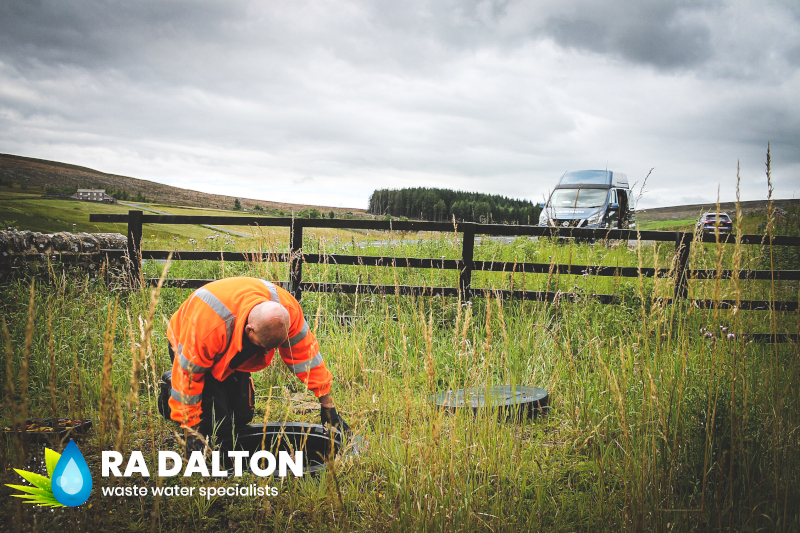 Round the corner to the Klargester BioTec 1.

This system was another standard service where the sludge depth was checked, filter replaced and all elements checked. An empty was required for this system however it was not deemed urgent but recommended to be done within the next few months.

It was at this point Sam then returned to the office and to finished compiling notes for what occurred over the day but the day did not stop here for Carl, throughout the course of the morning/ early afternoon some of our servicing customers had rang through with call outs.

As the sites were within reasonable distance on the way home Carl picked up the call-outs. 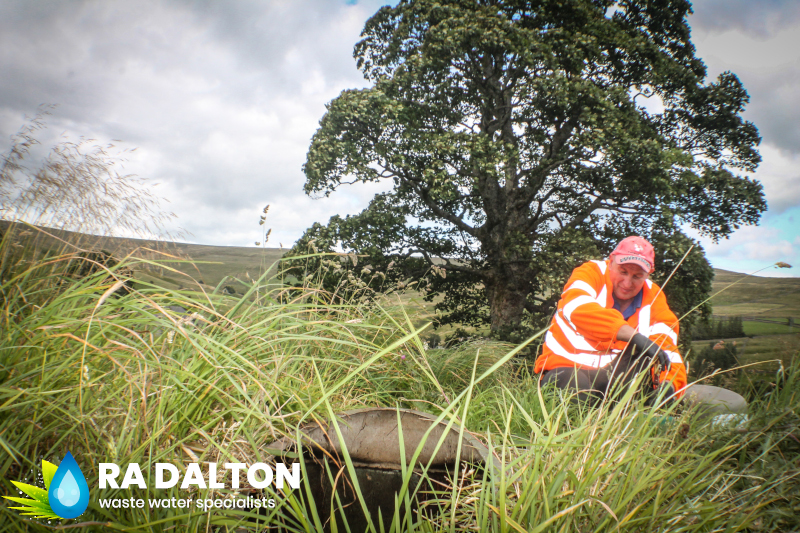 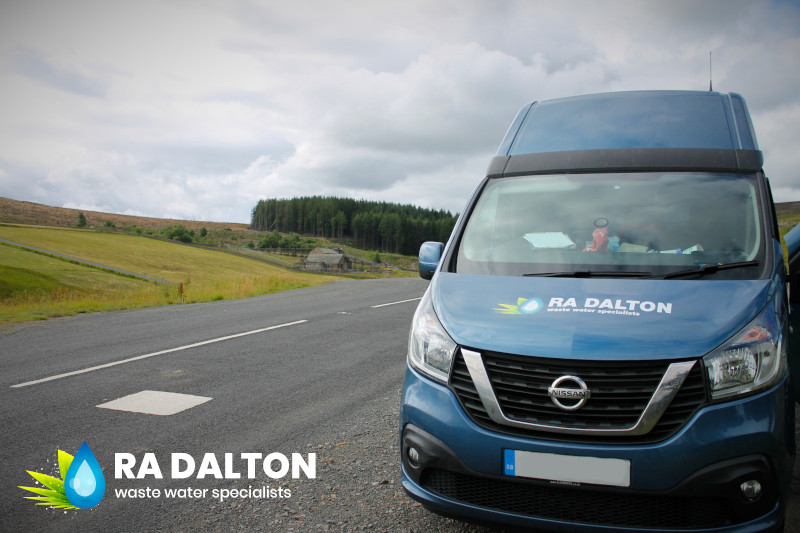 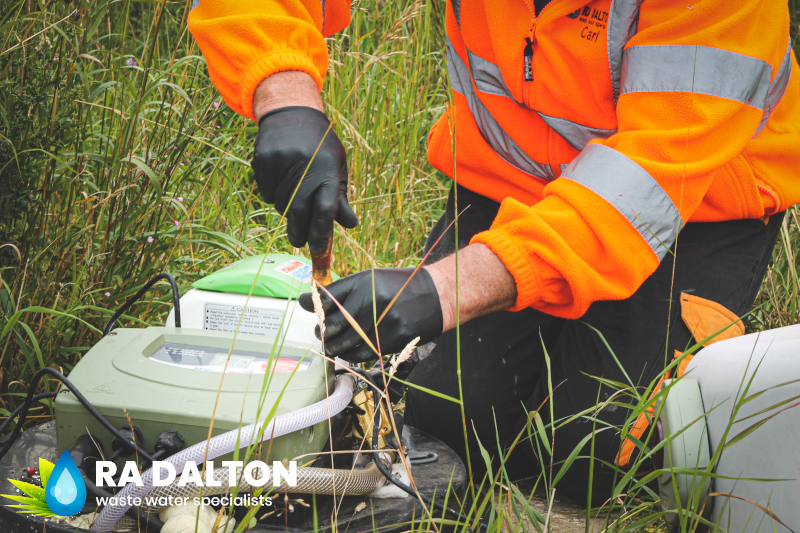 The first of the call outs was a servicing customer who was having issues with their sewage treatment system and integrated pump station after an electrician had attended to check the supply the fault was identified to be an earth fault and the system was only pulling 0.5 amps. Investigations and rigorous tests were carried out and a new pump was required on the system.

In a similar turn of events the second call out was to a pump station which kept tripping the electrics, the power had been isolated by any on site electrician and the pump station was determined to be the cause. Bad smells were also noted on site.

Carl attended site and pulled the pumps, checked all the windings and removed the rag/ blockages which were casing the issues.

By 8 PM Carl had finally finished his long haul Monday with 6 services ticked off the list and 2 call out customers happy to have their systems back up and running.

A summary of events.

It was a great opportunity for a member of our office team to join a servicing engineer out on the road, not only for future development for internal procedures but also to get an insight on the day to day processes they need to carry out.

I think it’s safe to say Sam enjoyed her day out on the road not only with expanding her knowledge of the operation of the sewage treatment systems but also to see areas of the north east which although local she had not seen/ visited before.

R A Dalton service engineers cover the lengths and breadths of the country and see many places we can only dream of visiting. 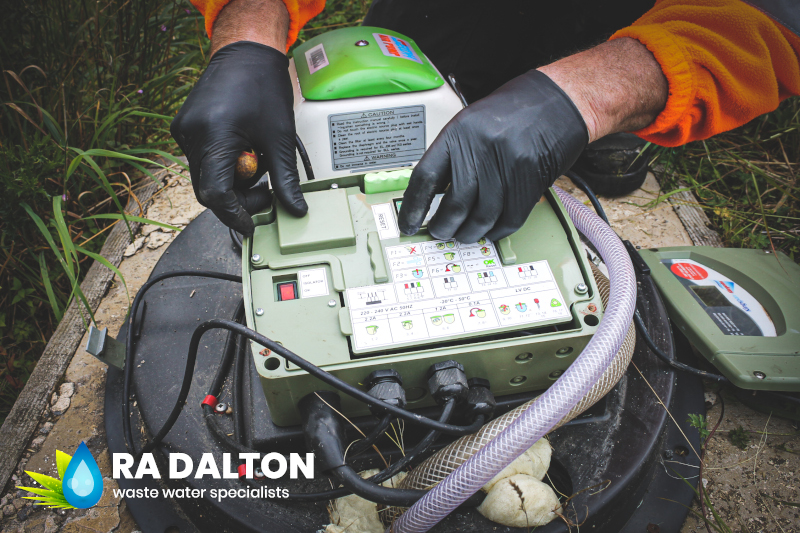 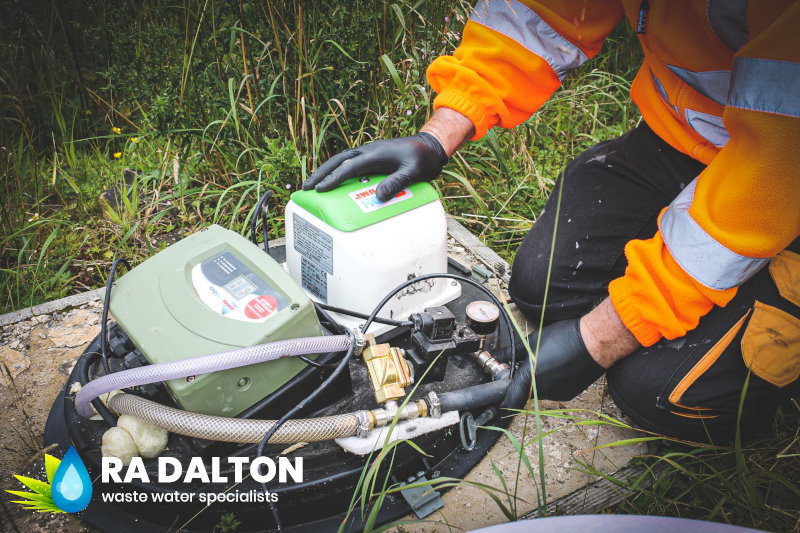